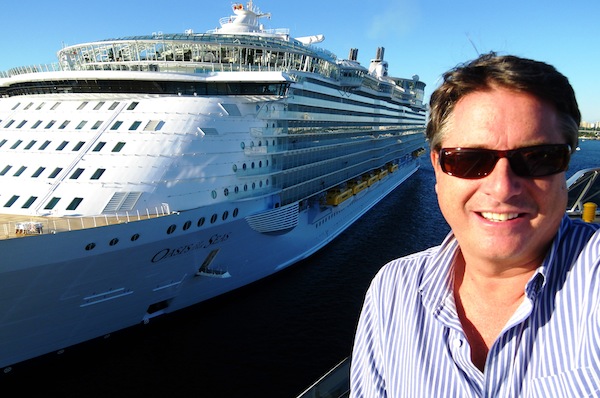 The world’s largest cruise ship may have entered service late last year but this coming week will mark the first time Oasis of the Seas sails into Western Caribbean waters.

Royal Caribbean’s engineering marvel begins a 7-night itinerary to Labadee, Haiti; Costa Maya, Mexico; and Cozumel, Mexico, Saturday, May 1, 2010. Cruise News Weekly Editor Michael Coleman, pictured with Oasis of the Seas in the background, is onboard and will be posting dispatches from the ship in this space in the day’s ahead.

A series of spectacular shore adventures in Northern Europe, from kayaking in the Baltic Sea to cycling among former imperial residences in Russia, will mark the maiden sailing season aboard Seabourn Sojourn.

The ship will operate a 14-day inaugural voyage from London to Dover on June 6, visiting Scotland, the Faroe Islands, Iceland, the Norwegian Fjords and Amsterdam.Â The maiden season will also include a series of 12- to 14-day voyages in Northern Europe, including Norway, Scotland, the Baltic Sea and Russia.

Like her sister ship, Seabourn Odyssey which debuted last summer, Sojourn will offer 225 suites, 90 percent of which have private verandas. All suites include separate living areas and bedrooms, writing desks with personalized stationery, iPod and MP3 connections and spacious granite bathrooms with separate bath and shower and twin sinks.

The new vessel will, among a host of amenities, offer a spa and four dining venues, including a spacious open-seating restaurant capable of seating all guests. Six bars and lounges will serve a full range of complimentary beverages including fine wines and spirits.

The ship’s shore adventures are equally impressive during her inaugural voyages. Look for over 100 optional excursions during Sojourn’s Northern Europe itineraries. Among the highlights:

Helsinki, Finland – Helsinki Nordic Walking —Â A local guide will lead walkers on a scenic path around the center of Helsinki, passing city parks, museums, and waterfront districts.
Â
Kiel, Germany – Kiel Highlights & Germany Brewing Culture — Guided by a Kieler Brauerei microbrewery team, guests will learn about the different local beer brands, the history of beer-brewing, ingredients, brewing methods, and brewing process; Cutter Sailing Experience — For a taste of living Baltic history, guests can enjoy a sail on the Gefion, a traditional two-masted Shark Cutter.Â They’ll learn how to hoist the sails and steer the ship plus discover the secrets of navigation and traditional seamen’s knots.
Â
St. Petersburg, Russia – Biking Alexandria Park — Guest can traverse through the 285-square-acre park of Alexandria, a magnificent ensemble of palace and park on the coast of the Gulf of Finland, where they will cycle past former imperial residences, hills and tranquil ponds, the ruins of old structures and small bridges.
Â
LÃ¼beck, Germany – A Local Fisherman’s Life — Guests can stroll on small paths among the beautifully preserved thatched fishermen’s houses and gardens of Northern Germany’s fishing villages. Visit a smokehouse and learn the traditional method of smoking fresh pike-perch, pike or eel over beech and alder wood.

Stockholm, Sweden – Millennium Walking Tour — Follow in the footsteps of the characters from “The Millennium Trilogy” series of best-selling detective novels by Swedish author Stieg Larsson; Kayaking in National City Park — Paddle out into Brunnsviken Bay, located in Haga Park, and explore this gulf that is part of the Baltic Sea.Â Enjoy the stunning natural beauty and surrounding cultural history of Brunnsviken, part of the world’s first national urban park.
Â
Seabourn has also pegged Sojourn for its world cruise in 2011. Departing Jan. 5, Sojourn will embark on a 111-day voyage from Los Angeles to London via the South Pacific, New Zealand, around Western Australia, Indonesia and Southeast Asia, India, Arabia and the Mediterranean.Â

Sojourn’s other sister, Seabourn Quest, will debut in 2011.

Celebrity Cruises will begin offering a variety of Apple products in their new Celebrity iLounge for guests to learn about, use and purchase. As the only authorized Apple reseller at sea, Celebrity will begin offering iPods, MacBooks and other Apple accessories. It’s essentially an Apple store at sea.

Whether guests are savvy or novice Apple users, Celebrity’s certified staff has been training so they’ll be ready to assist. The crew members working in the iLounge have gone through more than 125 hours of training in operating systems, applications and products. They have also been taught to show guests the differences between Macs and PCs.
Â
Celebrity’s President and CEO Dan Hanrahan said their surveys showed that their guests rely heavily on the Internet for research, learning and staying in touch, “so we think this new offering will be a big hit, as will the contemporary online classes offered through the ‘Discover’ series of our inspiring and enriching ‘Celebrity Life’ experiences.”
Â
The computer classes onboard will help with the typical things a person documenting their vacation would use. Some of the classes offered will include movie editing, web design and photo manipulation through Apple’s iLife applications: iPhoto, iMovie, iDVD and iWeb.

Located on deck six of the Solstice and Eclipse, the Celebrity iLounge will house 26 MacBook Pros, a classroom, retail area, display pods, and an accessible workstation. A 56-inch flat-screen TV will be set up for use during classes.
Â
On Summit, the iLounge will replace the current computer classroom on deck six, with the same new products and technologies as on Eclipse and Solstice. Even the “[email protected]” cybercafÃ© on deck four of Celebrity Summit will be retrofitted with entirely new MacBook workstations.
Â
The new iLounge will open on the Celebrity Summit by May 16, on the Solstice by May 30, and on the Eclipse when the new ship enters service. The iLounge also will be presented on Celebrity Silhouette, which launches in 2011, and the fifth ship in the Solstice Class fleet, which sails in 2012.

The MSC Poesia is a very modern ship with all the creature comforts. Its Italian feel may be a little different than what most Americans are used to, but it doesn’t take away from a great cruising experience.

Click Through to continue reading about the MSC Poesia – including a photo gallery and video.

Silver Spirit, the world’s newest ultra-luxury, all-suite ship, will embark on a 119-day world cruise next January with a roster of highly-acclaimed onboard speakers.

“The enrichment program is an integral part of our World Cruise experience and is designed to appeal to luxury travel’s most discerning clientele,” said Steve Tucker, Silversea’s vice president of field sales for North America. Among them:
â€¨â€¨
Dan Rather: Â The Emmy Award-winning broadcast journalist who anchored the CBS Evening News for 24 years, and contributed to CBS’ 60 Minutes and other prime-time news programs, will host Voyage 5107, March 22 – April 3, Hong Kong – Singapore. â€¨â€¨

Robert Lacey: Â The British historian and biographer, whose numerous international bestsellers include Majesty, considered the definitive study of British monarchy, is slated to host Voyage 5110, May 3 – 19, Athens – Southampton. â€¨â€¨

Zahi Hawass: Â The world-famous Egyptologist and secretary general of the Supreme Council of Antiquities in Cairo will host Voyage 5109, April 18 – May 3, Dubai – Athens.

â€¨â€¨Bruce Riedel: Â A senior fellow in foreign policy at the Saban Center for Middle East Policy of the Brookings Institution in Washington, D.C., former C.I.A. analyst, counter-terrorism expert and author is slated to host Voyage 5110, May 3 – 10, Athens – Southampton.

â€¨â€¨George Losey: Â A professor of zoology and marine biology at the University of Hawaii, who has studied the behavior and ecology of marine animals throughout the world, will host Voyage 5103, January 20 – February 1, Los Angeles – Papeete. â€¨â€¨

Scott Pearson: Â The recipient of a Ph.D. in economics from Harvard University, who taught economic development and international trade at Stanford University, winning several awards for his research and teaching, will host Voyages 5108 – 5109, April 3 – May 3, Singapore – Athens.

â€¨â€¨Lyn Farmer: Â The widely published wine and food writer and senior editor of The Wine News magazine, who has been honored with the James Beard Foundation Award for Best Writing on Wine and Spirits, will host Voyage 5105, February 12 – March 1, Auckland – Sydney.

â€¨â€¨Rosanne Martorella: Â The professor of sociology at William Paterson University and author of several books on art and society will host Voyage 5110, May 3 – 10, Athens – Southampton. â€¨â€¨

The voyage begins in Los Angeles on Jan. 19 and features some 60 destinations in 25 countries – with 11 overnight port visits – before concluding in Southampton on May 19.

Overall, look for the line to offer 96 choices from easygoing to exhilarating — including cultural tours, nature hikes, kayak adventures and flightseeing tours.

While the line will also feature immersive land/sea vacations featuring the state’s “must see” attractions, including Glacier Bay National Park and Denali National Park, the new land tour package includes:
Â
Wilderness Living Adventure & Dog Cart Ride (Denali) — How did the hunters, trappers and woodsmen of old travel and live in the wilderness of Alaska? Â This tour provides a look at many Alaskans who make their living in the wilderness near Denali.

Anaktuvuk Pass Adventure (Coldfoot) — Guests can visit a true Eskimo village with this tour to the Nunamiut village of Anaktuvuk Pass.

A Taste of Fairbanks — An evening at Chez World Cooking School will show travelers how to prepare food the Alaskan way.Â  Whether they fully experience the class with hands-on participation or simply watch the overhead monitors, students will learn the secrets behind Alaskan delicacies such as salmon, reindeer sausage, halibut, crab, moose, and caribou, as well sourdough bread and pancakes.

Susitna River Airboat Adventure (Mt. McKinley) — Travelers can experience parts of the lovely Susitna River that others can’t with this airboat excursion. Â

Sea Kayaking at Columbia Glacier (Copper River) — This opportunity to paddle into the massive Columbia Glacier icefield offers an experience that travelers will never forget. Â From Valdez participants take a scenic ride to Columbia Glacier for a kayaking expedition up close to the glacier, plus lunch on the beach.

Explore Historic Seward (Kenai) — From Kenai, passengers can enjoy a drive down one of the nation’s most scenic highways and past parts of the Iditarod National Historic Trail.Â At the end of the road at Resurrection Bay is the historic city of Seward, gateway to Kenai Fjords National Park.Â

South Denali 65-Mile ATV Adventure (Mt. McKinley) — An ATV adventure along dirt roads carved out of the wilderness by the area’s first prospectors, this tour takes travelers far into the back-country of south Denali with its cascading waterfalls and scenic wonders. Â Participants can also try their hand at panning for gold in Peters Creek.

Scenic Koyukuk River Float (Coldfoot) — It’s not too often that travelers can enjoy a scenic float trip 60 miles north of the Arctic Circle!Â  This tour takes passengers down the Middle Fork Koyukuk River through the Brooks Mountain Range, where they can relax as their raft floats through the vast wilderness of Alaska and a guide shares the rich history of the region.