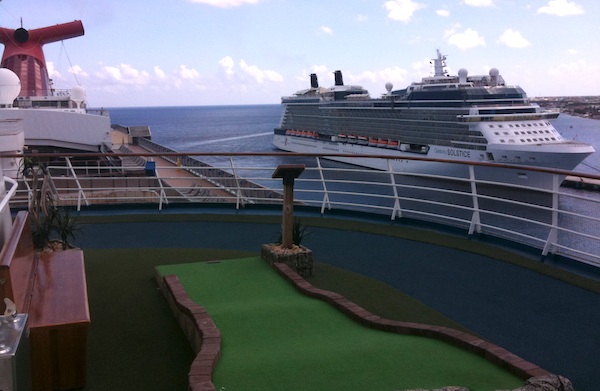 The Carnival Legend and Celebrity Solstice docked in Cozumel, Mexico on June 23, 2010. Photo by Matt Roseboom

Each day during the cruise, (when Internet access is available) we’ll be posting live photos, videos and information right from the ship and ports.

Each an authentic tall ship, guests can immerse themselves in respective journeys where the wind charts one’s course. Climb the mast for a better view of the horizon or simply relax in the net suspended over the bow with nothing but crystalline waters below.

Look for the vessels to seek out hidden harbors and destinations untouched by larger ships. No long lines on board, no crowds plus a casually elegant atmosphere.

The twin mega-yacht cruisers are offering overnight and late night Caribbean island visits plus an array of new water toys for the young and the young at heart this fall in the Caribbean.

Look for overnight calls at St. Bart’s and tiny, exclusive Norman Island as well as active stops at the Spanish Virgin Islands of Culebra, Culebrita and Vieques with its bioluminescent bays.Â

SeaDream I and II — each with just 112 guests – are now offering a new array of water toys for guests to enjoy from the vessels’ stern marinas. In addition to its zodiacs, water skis, banana boats, wave runners, floating island and snorkeling equipment, it has added twin-hulled Hobie cats, laser sailboats and glass bottom molokini kayaks and glass bottom hanauma II inflatable kayaks to the mix.

The Galapagos Explorer II, operating in the Galapagos Islands, is offering a family adventure package featuring a discount of 75 percent off the cruise rate for two children under 15 years, and an additional 50 percent discount for a third child.Â

Look for snorkeling equipment, Internet access, special activities for children, and a family picture to be included in the cruise fare.

The all-suite, 100-passenger vessel features excursions led by bilingual naturalist guides. The end result? Guests enjoy a personal experience on the islands and a greater understanding of wildlife and evolution.

The adventure package is available for departures through September 2010.

British supermodel Twiggy was among the 700 attendees during christening ceremonies for the new 450-guest Seabourn Sojourn, which debuted in London last week.

Sojourn is the second of three new luxury cruising vessels to join Seabourn’s fleet. Sister Seabourn Odyssey was unveiled last summer in Venice. Seabourn Quest will debut in 2011.
Sojourn is presently operating 12- to 14-day voyages during the summer to the Baltics, Scandinavia, Russia, Norwegian Fjords and Scotland, as well as several Mediterranean voyages in the fall.

The line is celebrating her launch — Twiggy was named Godmother — with a number of special value fares during the remainder of 2010.

The launch of Sojourn brings the number of ultra-luxury yachts in the Seabourn fleet to five. Sojourn offers travelers highly personalized service in a relaxed, sociable and luxurious atmosphere. Like its sister Sojourn features 225 spacious suites, 90 percent of which have private verandas.

The two-deck, state-of-the-art Spa at Seabourn features a Spa Villa for hours of indulgence and relaxation, as well as a Kneipp Walk, an herbal bath facility and an aroma steam bath with salt inhalation.

The new vessel has four dining venues featuring menus by celebrity Chef Charlie Palmer, as well as six bars and lounges serving a full range of beverages including fine wines and spirits with Seabourn’s compliments.

On Jan. 5, 2011, Sojourn will embark on a world cruise from Los Angeles to London via the South Pacific, New Zealand, around Western Australia, Indonesia and Southeast Asia, India, Arabia and the Mediterranean. Rates for the full 111-day world cruise begin at $49,995 per person, based on double occupancy, and include a number of additional benefits and amenities such as a pre-cruise Bon Voyage event with dinner and luxury overnight in Los Angeles, special shoreside events and exclusive complimentary shore excursions, Personal Valet luggage shipping service, and shipboard credits.

For a limited time, Seabourn is also offering two-for-one cruise fares with include round-trip air, or cruise-only fares featuring savings up to 65 percent. The promotion is valid for Seabourn voyages in Europe departing between June and November 2010.

DreamWorks Animation and Royal Caribbean are joining forces to bring fairy tales to life at sea.

Many of the fun characters from DreamWorks Animation movies will be newest entertainment on Royal Caribbean ships. Young (and young-at-heart) cruisers will be able to meet favorites such as the characters from “Shrek” – Fiona, Shrek and Puss in Boots; Alex, Marty and the Penguins from “Madagascar”; Po from “Kung Fu Panda”; and Hiccup from “How to train your Dragon”. The Allure of the Seas will be the first to have theses fun new characters onboard when it launches later this year.

“Royal Caribbean and DreamWorks Animation share many of the same philosophies when it comes to high-quality family entertainment, so there is quite a lot of synergy going into this strategic alliance,” said Adam Goldstein, president and CEO, Royal Caribbean International. “We are constantly striving to offer dynamic and engaging programming onboard our ships and couldn’t think of a better brand to help take it to the next level.”

Guest of all ages will be able to enjoy new unique experiences with these lovable characters during their cruise vacation. Special events and parades will entertain guests throughout the cruise. During the interactive character dining in the main dining room, guests can have a great meal with visits from the DreamWorks friends. Photo opportunities will be available all around the ship.

The Adventure Ocean children’s program is preparing a whole new line up. Children will love the new games and fun actives that will include their favorite animated characters. Dance parties, story times and more will all be included in the price of the cruise.

New and old DreamWorks Animation movies will also be available at sea. The installation of new 3D screens in the ship’s theaters will bring the movie watching experience up a notch. Guests will also have the option of enjoying the movies in their stateroom.

“Royal Caribbean is a world-class leader in the cruise ship industry who excels at continually finding innovative ways to raise the bar in providing family entertainment at sea,” said Jeffrey Katzenberg, CEO, DreamWorks Animation. “We look forward to working with them to incorporate Animation characters and storytelling throughout the entire cruise experience.”

The alliance of these two companies makes for another exciting first at sea as a cast of characters to take the stage in the AquaTheater. This amazing venue has a one of a kind aquatic based show full of acrobatics and high-diving stunts. The Madagascar Aqua Show, “Let you entertain me,” will be a treat for the whole family. Also, in addition to the already famous ice skating shows of Royal Caribbean, they’ll be adding a “How to Train Your Dragon” spectacular ice show. While these special shows won’t cost extra, cruisers might want to reserve their tickets early, for they’re sure to very popular.

Allure of the Seas will be sailing out of Fort Lauderdale to the Eastern and Western Caribbean throughout 2011. Sailing dates on the world’s largest ship start in December. After launching on Allure, the Animation-themed activities will be incorporated on Oasis of the Seas, Freedom of the Seas and Liberty of the Seas.

On the Web: royalcaribbean.com

“The enhancements aboard Silver Whisper represent our ongoing commitment to delivering a luxury travel experience that is unsurpassed,” said Amerigo Perasso, Silversea’s president and CEO.

“We made a significant investment in this renovation to ensure our guests continue to enjoy the very finest comforts and amenities in a totally refreshed and updated shipboard environment.” â€¨â€¨Echoing the sophisticated contemporary design themes and warm color palettes of Silversea’s newest ship, Silver Spirit, makeover highlights include:

The Suite Life
All carpets, headboards and curtains were completely replaced. The sofas and chairs feature new upholstery. Each suite has a new mattress custom-made exclusively for Silversea. Look also for a new memory foam pillow top that covers the mattress when configured as a queen-sized bed.

â€¨â€¨And in the larger suites (Owner’s, Grand, Royal and Silver), the veranda furniture was replaced and a new state-of-the-art home audio system added. The Owner’s, Grand and Royal Suites are outfitted with Bang & Olufsens BeoSound 3200 radio and CD player, and the Silver Suites have BeoSound 1, which features a CD and radio integrated into a speaker. â€¨â€¨

By mid-June, all suites will feature new alarm clocks with iPod docks – as will all ships in the Silversea fleet. â€¨â€¨

Outdoor Spaces
The jogging track features all-new artificial turf, and the pool area has been outfitted with new deck furniture, plus a new sound and light system for evening entertainment and outdoor shows. The pool itself has been upgraded inside and out with new tiles. A large awning was installed over the outdoor dining section of La Terrazza. And the Pool Grill, sporting a new awning as well, will become The Grill for evening dining.

â€¨In addition to enjoying a fresh reconditioning and polishing of teak decks and woodwork, the ship underwent thorough maintenance on mechanical and propulsion systems. â€¨Â  â€¨