As we end our first year of Cruise News Weekly online, I thought it’d be a good time to go back and look at which of our online stories had the most views. Here are our top 10 most read cruise stories for 2009 – counting down to number one.

Guests to christen Seabourn Odyssey
A new ultra-luxurious yacht, set to debut in June 2009, will be christened by each of its guests prior to its maiden voyage.
Full Story

New cruise ships poised for debut
The cruise industrys top players will be positioning five of their latest ships in Fort Lauderdale this winter.
Full Story

Fairy tale romance aboard Ruby Princess
This is a tale about the Ruby Princess. She is large but beautiful, always ready for fun and romance, and she’s all about great food. No this isn’t a fairy tale, it’s life aboard Princess Cruises’ newest ship.
Full Story

Detailed model of Royal Caribbean’s Oasis of the Seas
One of the busiest booths at this week’s Seatrade Cruise Shipping Miami conference (besides Mexico’s when they were giving out free beer) was that of STX Europe, the builder of Royal Caribbean’s upcoming newest ship.
Full Story

Music’s top stars on board for One Splendid Evening
Carnival Cruise Lines and Mayercraft Carrier 2 will present “One Splendid Evening,” a special concert event to benefit the VH1 Save The Music Foundation. The one night only event will take place the evening of March 26.
Full Story

Carnival Dream to offer on-board social networking
The new Carnival Dream, debuting Sept. 21, will take seagoing technology to a new level with the introduction of the FunHub, a comprehensive shipboard intranet portal featuring the cruise industry’s first on-board social network, along with access to a wide variety of information on the ship’s services, facilities and daily activities.
Full Story

See rendering, video of Carnival Dream’s water slide
Carnival has released a new artist’s rendering and a test video of The DrainPipe, a unique water slide that will be on the new Carnival Dream when it launches Sept. 21.
Full Story

Win prizes in Royal Caribbean’s new online game
Royal Caribbean International is offering vacationers the opportunity to discover the cruise line’s experience without leaving shore. Royal Caribbean’s “Clues to the Cruise” promotion is challenging adventurers of all ages to explore the new Nation of Why Not and the many ‘why not’ moments guests can enjoy on a Royal Caribbean cruise.
Full Story

Oasis, Allure poised for debuts
The largest cruise ship ever constructed will debut in just seven months but the company launching Oasis of the Seas is hard at work preparing for the unveiling of an equally mammoth sister-ship.
Full Story

The Carnival Dream recently made her North American debut. The 130,000-ton ship is the first of a new class of ships for Carnival Cruise Lines and their largest yet. It’s 1,004 feet long and holds up to 3,646 passengers. The Dream offers many firsts for Carnival and cruise lines in general.

Click here to read the full review, and view our photo gallery and videos from the ship.

Three of the world’s largest cruise ships ever constructed are making their North American debuts this week.

MSC Poesia, Carnival Dream and the worldÂ´s biggest passenger vessel, Royal Caribbean’s Oasis of the Seas, were all unveiled to much pomp and circumstance.

It’s a testament to the highly-competitive industry that executives still moved forward with their ambitious plans despite one of the worst economic times on record. As such, it’s also a great time to be a consumer as deals for couples and families aboard these ships and others, particularly in the Caribbean, are among the best in years.

MSC’s Poesia officially launched in 2008 but the 2,550-passenger vessel arrived this week from Europe to make her Caribbean debut.

The ship will feature itineraries of three, five, seven, eight and 10 nights throughout the Caribbean and to Bermuda during the winter season before returning to Europe in spring 2010.

The 93,300-ton ship features 1,275 staterooms, of which 80 percent are outside, 65 percent of which have a balcony. Guests can enjoy two pools and four hot tubs, a 13,000-square-foot spa, and four restaurants, including a sushibar themed restaurant.

Poesia will also host an extensive lineup of theme cruises ranging from Latin, country, oldies, big band and even polka music to comedy, life modification and the line’s popular baseball theme cruises which have attracted some of the game’s greatest talent to the Caribbean seas.

The 130,000-ton Carnival Dream, meanwhile, debuted in New York this week. It’s the largest ship Carnival has ever constructed and clearly ushers in a new “Fun Ship” era.

Look for a host of innovations, including Carnival WaterWorks, an expansive aqua park featuring the longest water slide at sea; Ocean Plaza, an indoor/outdoor cafÃ© and live entertainment venue; more than 19,000 square feet of space dedicated to children and families; and a 23,750-square-foot Cloud 9 Spa, the largest in the line’s fleet.

The 3,646-passenger ship will operate a series of voyages from New York before repositioning to Port Canaveral to begin year-round Caribbean service starting Dec. 3.

The largest cruise ship ever built by a long shot, at 225,282 tons, Royal Caribbean’s Oasis of the Seas is both an engineering feat and jaw-dropping marvel. She begins sailing year-round from Port Everglades in December.

The ship introduces a host of industry “firsts” including a neighborhood concept — seven main themed areas providing guests with the opportunity to seek out relevant experiences based on their personal style, preference or mood.

Look for Central Park, the first living park at sea with nearly 12,000 plants and trees; Boardwalk, a family oriented environment with a hand carved carousel; a zip line wire ride that races diagonally nine-decks above an open-air atrium; 28 multilevel loft suites (the first at sea) boasting floor-to-ceiling windows; an AquaTheater that serves as a pool by day and a dazzling oceanfront theater by night for high-diving and aquatic acrobatic performances.

Oasis also features 24 dining options including the upscale 150 Central Park, healthy fare at Solarium Bistro, sweets at The Cupcake Cupboard (a first at sea) and the traditional main dining room.

Watch as the brand new Carnival Dream cruise ship just barely fits under the Verrazano Narrows Bridge. The ship had just left New York City on Friday the 13th, 2009 for a two-night cruise.

We’ll be reporting live from Carnival Cruise Lines’ new ship, Carnival Dream, this Thursday, Friday and Saturday (Nov. 12, 13, and 14, 2009). You can follow our updates here, on Twitter (twitter.com/cruiseguide) and on Facebook (facebook.com/cruisenews).

In addition to our coverage, the official naming ceremony featuring Academy Award- and Tony Award-winning actress Marcia Gay Harden, the ship’s godmother, will be broadcast live on the Carnival’s Web site, carnival.com/dream beginning at 4 p.m. EST on Thursday, Nov. 12.

Live streaming video of the invitation-only event will include an exhilarating dance performance, a nearly six-foot-tall champagne bottle and some other unexpected surprises. The ceremony will be hosted by Carnival’s Senior Cruise Director John Heald while the 3,646-passenger Carnival Dream is docked in New York City.

A live chat offering viewers an opportunity to ask questions about the Carnival Dream and comment on the festivities will take place during the webcast as, well.

The Carnival Web site also features exclusive photos and videos of the ship’s facilities and features. Interviews on the site include various shipboard personnel, as well as Carnival’s interior architect, Joe Farcus.

The 130,000-ton Carnival Dream ushers in a new era in “Fun Ship” cruising, offering a host of innovations. These include Carnival WaterWorks, an expansive aqua park featuring the longest water slide at sea; Ocean Plaza, a stunning indoor/outdoor cafÃ© and live entertainment venue; more than 19,000 square feet of space dedicated to children and families; and a 23,750-square-foot Cloud 9 Spa, the largest in the line’s fleet.

The Carnival Dream debuted in Europe Sept. 21 and will operate a series of voyages from New York before repositioning to Port Canaveral, Fla., to begin year-round Caribbean service starting Dec. 3, 2009. 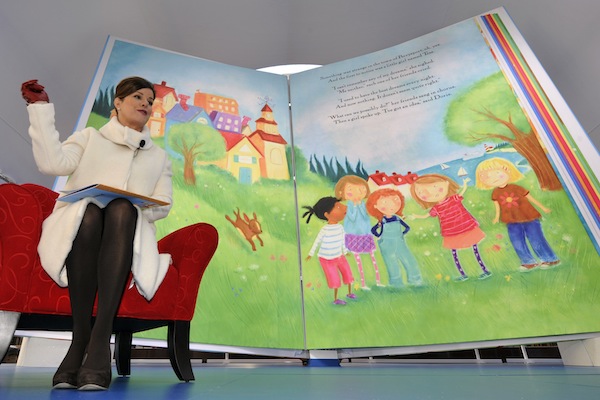 In celebration of the launch of its newest, largest and most family-friendly “Fun Ship” ever, Carnival Cruise Lines announced that Academy Award-winning actress Marcia Gay Harden will serve as godmother of the new Carnival Dream. She unveil the world’s largest children’s book in New York City on Friday, along with a major, multi-year partnership with St. Jude Children’s Research Hospital.

New Yorker and mother of three, Harden will officially name the new ship when it makes its North American debut in New York on Nov. 12, 2009. In honor of Carnival Dream’s much-anticipated arrival, the Tony Award-winning actress unveiled Carnival’s Big Book of Dreams — measuring 15.5 feet high by 20 feet wide — in New York City’s Rockefeller Center and conducted a special reading of the larger-than-life story to dozens of schoolchildren. Inspired by the imaginative dreams of children who sailed on Carnival Cruise Lines this spring, “The Dream Plucker of Perrysport” tells the tale of a group of young friends who find themselves on a unique adventure after they encounter a furry orange monster in a quest to remember their dreams.

“As a mother and actress driven by the idea of dreaming big, I’m honored to take on this new role as godmother of Carnival’s largest-ever ship and to help bring the Big Book of Dreams to life for local children,” said Marcia Gay Harden. “I’m also inspired by Carnival’s dedication to support and encourage all kids to dream big through its partnership with St. Jude.”

During the three-year partnership with St. Jude, Carnival Cruise Lines’ goal is to raise $3 million to help achieve the hospital’s mission of finding cures and saving children with cancer and other catastrophic illnesses. To support the hospital, under the theme “Care to Play,” Carnival is creating a number of fun, interactive on-board fundraising activities that will involve guest participation. Carnival will also donate hundreds of kid-sized copies of “The Dream Plucker of Perrysport” to the hospital.

“We’re excited to have a dream-worthy lineup of activities to celebrate the launch of the Carnival Dream, including the talented Marcia Gay Harden as godmother, and to bring kid’s dreams to life in the biggest children’s book ever,” said Carnival President and CEO Gerry Cahill. “We are also very proud and honored to work with St. Jude to further support its wonderful work and inspire the children and families of St. Jude to never lose sight of their dreams.”

“We are so fortunate to work with compassionate companies like Carnival,” said Richard C. Shadyac Jr., Chief Executive Officer of ALSAC, the fundraising organization of St. Jude. “Every dollar donated by Carnival and its guests through the Care to Play fundraising activities will help St. Jude continue its efforts in finding the cures and providing the treatments that will save children’s lives. On behalf of everyone at St. Jude, thank you.”

The 130,000-ton Carnival Dream, is a new class of vessel for the lineg. On Sept. 21, the Dream began its inaugural voyages in Europe and will make its North American debut in New York on Thursday, Nov. 12. The 3,646-passenger Carnival Dream offers a host of innovations including more than 19,000 square feet of space dedicated to children and families, as well as an expansive WaterWorks aqua park featuring the longest water slide at sea. The ship also offers an indoor/outdoor cafÃ© and entertainment venue called Ocean Plaza, a two-level Serenity adults-only retreat, a wrap-around promenade encircling the ship and a 23,750-square-foot health spa.

To learn more about Carnival Dream and the Carnival Book of Dreams, visit BigBookofDreams.com. 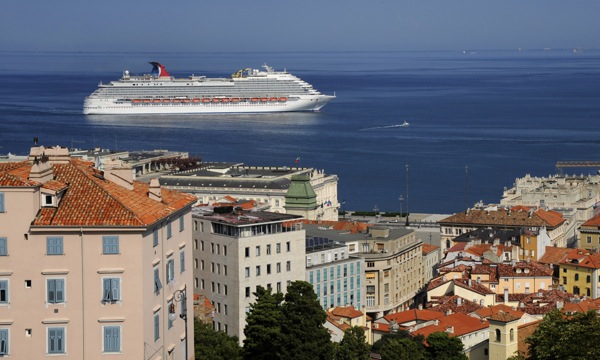 With the massive scale of Carnival’s newest and largest “Fun Ship,” the 130,000-ton Carnival Dream combined with technological advancements, the line’s entertainment team hopes to have created the most spectacular shows at sea.

In addition to three production revues that will feature elaborate sets and costumes, state-of-the-art video technology and sophisticated special effects, Carnival Dream will offer everything from solo singers, comedians, and live bands, to “Fun Force,” the line’s high-energy acrobatic team, which will perform in different areas throughout the ship. END_OF_DOCUMENT_TOKEN_TO_BE_REPLACED