Have you ever wondered how – even with the most-amazing of latest technologies – a modern-day cruise ship is constructed?

It’s an enormous undertaking even for the world’s most popular cruise line.

With less than seven months until its maiden voyage, the new Carnival Magic reached another construction milestone when it was “floated out” earlier this week from her outfitting quay at the Fincantieri shipyard in Monfalcone, Italy.

The initial stages of a cruise ship’s construction take place in a dry dock facility.Â Once exterior outfitting is completed, the dry dock is flooded with water and the ship is “floated out” and moved to a wet dock facility where construction continues.

Carnival has removed the veil on the entire construction process by providing both exclusive images and video of the Carnival Magic’s construction at an amazing interactive website. Just click the “How It’s Made” icon at the top of the page for a rare look into the fascinating process of cruise ship construction.

The ship’s next major milestone — sea trials in the Adriatic Sea — is slated for early next year in anticipation of Magic’s May 1, 2011 European debut.

The most innovative “Fun Ship” in Carnival’s fleet to date, Magic will offer a host of new facilities and features including the RedFrog Pub, a Caribbean-inspired watering hole with its own private label beer; Cucina del Capitano, an Italian family-style restaurant that brings the heritage of Carnival’s captains to the table; and SportsSquare, an expansive sports complex featuring the first-ever ropes course and outdoor fitness area at sea.

Other innovations include Carnival WaterWorks aqua park, a Serenity adults-only retreat, The Lanai, a wrap-around promenade with whirlpools that extend out over the ship’s sides and what the line bills as a “stunning’’ indoor/outdoor cafÃ© and live entertainment venue called Ocean Plaza.

The ship is slated to debut with a nine-day cruise from Venice to Barcelona May 1-10, 2011, followed by a series of seven-to 12-day Mediterranean voyages from Barcelona, Carnival’s first-ever departures from the Spanish port.Â Following a 16-day trans-Atlantic crossing, Magic will launch seven-day Caribbean service from Galveston Nov. 14, 2011, becoming the largest cruise ship ever based in Texas year-round.

On the web: carnival.com 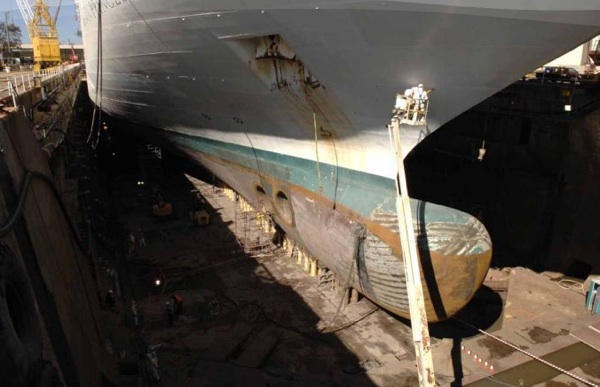 Following the response to its unprecedented online Golden Princess Drydock Journal last month, Princess Cruises is again inviting cruise enthusiasts to go behind the scenes as Dawn Princess undergoes a similar makeover. Visitors to princess.com will be able to watch daily as the ship receives new interior furnishings and finishes, plus adds two Princess signature features — the Movies Under the Stars giant poolside screen and the relaxing adults-only Sanctuary. END_OF_DOCUMENT_TOKEN_TO_BE_REPLACED 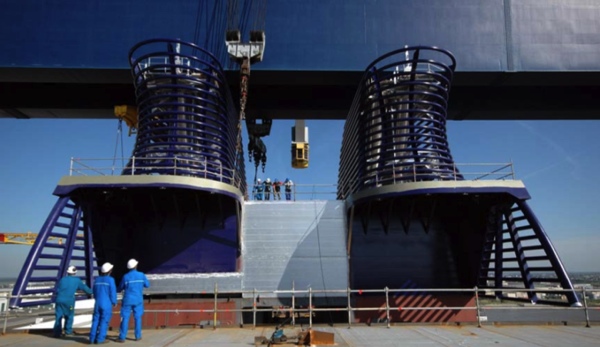 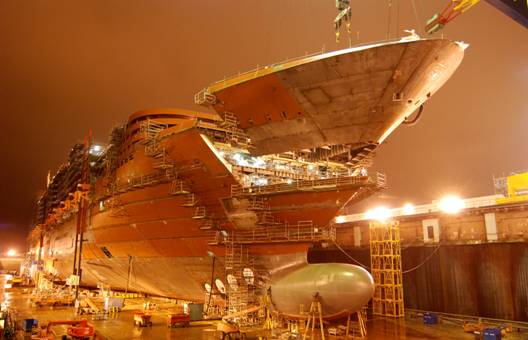 Norwegian Epic’s construction, underway at STX Europe in St. Nazaire, France, celebrated a milestone in the early morning hours last Wednesday, April 9, when the ship’s bow was lowered into place. The bow, known as block 642, weighed 445 tons and measured 85 feet long, 108 feet wide and almost 30 feet high. The process of putting the bow in place took 100 workers about two hours. This significant step represents the completion of the lower part of the steel hull, those areas that come in contact with the sea, and indicates that only the superstructures, or topsides, remain to be finalized. END_OF_DOCUMENT_TOKEN_TO_BE_REPLACED

One of the busiest booths at this week’s Seatrade Cruise Shipping Miami conference (besides Mexico’s when they were giving out free beer) was that of STX Europe, the builder of Royal Caribbean’s upcoming newest ship. The reason for the crowd was their model of that revolutionary ship, Oasis of the Seas. Here are some more pictures of the model and information about the ship. END_OF_DOCUMENT_TOKEN_TO_BE_REPLACED 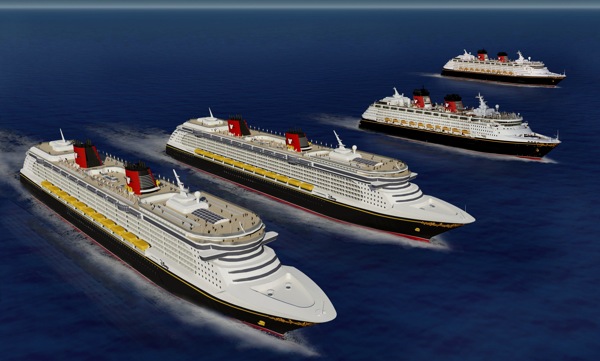 At today’s 2009 Annual Meeting of Shareholders of The Walt Disney Company, Disney announced the names of the company’s two new cruise ships.

“Last week, steel cutting began on our next two Disney cruise ships. Today I’m pleased to announce their names,” said Robert A. Iger, Disney president and CEO. “The Disney Dream will set sail in 2011, while the Disney Fantasy will hit the high seas in 2012.” END_OF_DOCUMENT_TOKEN_TO_BE_REPLACED

A ceremony marking the keel laying for Oceania Cruises’ Marina was held over the weekend at the Sestri Ponente shipyard of Fincantieri near Genoa, Italy. END_OF_DOCUMENT_TOKEN_TO_BE_REPLACED

Disney Cruise Line began construction on two new ships today with a steel cutting ceremony at the Meyer Werft shipyard in Papenburg, Germany. The ships are scheduled for completion in 2011 and 2012. END_OF_DOCUMENT_TOKEN_TO_BE_REPLACED