That might seem surprising to some — great dining is traditionally the domain of the luxury cruise sector and not necessarily what one expects to find on a 2,402-passenger mass market vessel.

Jade, however, delivers. There are some 14 dining options and passengers would be hard-pressed to find comparable dÃ©cor, quality and service at even their favorite land-based locales.

From U.S. steak and seafood (Cagney’s), plus Tex-Mex (Paniolo Tapas & Salsa), to French (Le Bistro) and Italian (Papa’s Kitchen) offerings, the ship is alive at dinner hour. Most notably, Jasmine Garden is the culinary hub. The Asian restaurant complex, located on Deck 7 mid-ship, features made-to-order sushi and sashimi, a Sake Bar and a Teppanyaki grill and is clearly a runaway favorite with passengers.

Look for Cagney’s, a classical steakhouse from the 1930s and the ship’s signature restaurant, to serve a 32-ounce porterhouse for two; at Paniolo their zesty signature dish — lobster tacos — is a must; and both Le Bistro and Papa’s offer classical French and Italian fare respectively.

And, while all of the aforementioned specialty restaurants require nominal fees ranging from $10-25 per person, Jade still packs a punch with quality food and choice in its no additional charge main dining rooms – Grand Pacific and Alizar — plus Garden CafÃ© where enticing buffet spreads are offered including specialty dishes from ports which the ship has just visited. Following a port call this week to Izmir, Turkey for instance, the culinary team featured Turkish bread with chicken plus assorted kebabs.

Dining options are a big factor today within the cruise industry as more ships than ever before offer alternative onboard venues for their passengers to enjoy. At Norwegian Cruise Line, however, it’s the very premise of their “Freestyle Cruising’’ concept where one is offered a host of outstanding dining choices, relaxed dress codes, and the freedom to dine with whom they want, when they want at a locale that’s right for them on the evening of their choosing. As such, all restaurants aboard Jade feature open seating and flexible, extended dining hours.

Specialty restaurant reservations can be made in respective locales just minutes before dining although, to avoid disappointment, advance reservations are recommended.

Bernstein sails on the 12-dayÂ voyageÂ departing from Venice, Italy, to Barcelona, Spain. The ship will call at Catania, Naples, Civitavecchia (Rome) and Livorno (Florence/Pisa), Italy; Dubrovnik, Croatia; Kerkira (Corfu), Argostoli and Thira (Santorini), Greece. The voyage also features scenic cruising through the Strait of Messina, a narrow passage between the eastern tip of Sicily and the southern tip of Calabria, Italy.

During the cruise, Chef Bernstein will perform cooking demonstrations for guests in the ship’s state-of-the-art show kitchen and participate in question and answer sessions.

Chef Bernstein, a Miami native, was professional ballerina before realizing her true passion for cooking after taking a class on nutrition. She later enrolled in Johnson and Wales University’s College of Culinary Arts. After graduating, Bernstein trained under iconic French Chef Jean-Louis Palladin and began working with renowned chefs at several premier restaurants including Red Fish Grill, The Strand and Tantra in Miami Beach. Bernstein later served as lead chef at Azul, the Mandarin Oriental’s signature restaurant in Miami, where she became a force in the city’s burgeoning culinary movement. She later became a household name after serving as a judge on Bravo’s acclaimed “Top Chef” series. She also hosted the PBS series, “Check, Please!”

Bernstein co-hosted The Food Network’s “Melting Pot,” a show that presented the traditions, stories and recipes of her Latin background. She also was a competitor and winner on the Food Network’s “Iron Chef America” series. She has been featured in both “The New York Times” and “Bon AppÃ©tit” magazine for one of the “50 Best Dishes in the World” and in “Gourmet” and “Food & Wine” magazines, for one of the best hotel restaurants in the country. Her restaurant ventures include Michy’s and Sra. Martinez in Miami, MB in Cancun, Mexico, and Michelle Bernstein at The Omphoy in Palm Beach, Fla.

Holland America Line’s Culinary Arts Center is featured on each of the line’s 15 ships.Â Each facility features a theater-style venue with two large plasma video screens and a large cooking display counter. For cruises that do not have a celebrity chef on board, classes and demonstrations are conducted by Holland America Line’s own expert chefs.

Note: Be sure to follow your Cruise Guide columnists as we report live from Carnival’s newest ship, Carnival Magic, from May 1 to 10 in Europe. We’ll be reporting on our Facebook and Twitter accounts. Visit CruiseNewsWeekly.com for links.

Silversea Cruises has unveiled a new collection of 10 culinary arts theme cruises for 2011 featuring some of the world’s top chefs and rising stars. â€¨â€¨

The cruises will showcase the artistry of award-winning chefs of top dining establishments from around the world, including the internationally acclaimed chefs of Relais & ChÃ¢teaux, the distinguished international association of 500 of the finest hotels and gourmet restaurants in 60 countries.â€¨â€¨

Two of these famed chefs will soon team up to host Silver Shadow’s 30-day circumnavigation of Australia. Departing from Sydney later this month the ship will follow a counterclockwise course around the vast island continent before returning to Sydney on February 18. Joining an expansive enrichment program on this special voyage are George Francisco, executive chef of Jonah’s, one of Australia’s oldest and most iconic establishments and a Relais & ChÃ¢teaux member property and Mathew Macartney, executive chef of the Yarra Valley’s famed Chateau Yering and a Relais & ChÃ¢teaux member property.

â€¨On the Culinary Arts enrichment voyages, celebrity chefs will display their talents during informative cooking demonstrations where guests can taste and learn firsthand the secrets of enticing signature dishes.

These voyages also feature escorted provisioning trips to international markets (when the itinerary permits), food and wine pairings, creative regional dishes, and a five-course grand gourmet dinner. Throughout these special sailings, the featured guest chef and Silversea’s executive chef are on hand to share their culinary expertise and answer any questions. â€¨â€¨

Aboard Silver Shadow, December 6-21, 2011 Singapore to Sydney, Silversea guests will have the chance to sample the Korean cuisine specialties of Anna Kim, a celebrity chef judge of the LG ‘Life Tastes Good’ global cooking competition. She apprenticed at world-renowned chef JoÃ«l Robuchon’s restaurant in Paris and held esteemed positions at Nobu, Gordon Ramsay and the Four Seasons Hotel in the U.S. â€¨â€¨

And Emanuele Vallini, executive chef of La Carabaccia restaurant, Pisa, Italy, will showcase the slow food concept in a culinary program for guests aboard Silver Spirit later this month during the ship’s world cruise segment), Los Angeles to Papeete. â€¨â€¨

Further highlighting the roster of Culinary Arts voyages are the following distinguished chefs affiliated with Relais & ChÃ¢teaux properties from around the globe:

Two additional voyages in 2011 will bring together an array of yet-to-be-named Relais & ChÃ¢teaux chefs to host culinary festivals at sea: Silver Whisper, May 17-31, New York to Southampton; Silver Shadow, October 17-31, Tokyo to Singapore 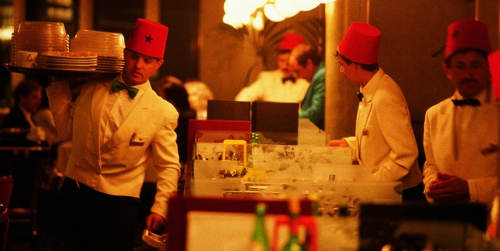 Costa is unrolling a new “Buon Appetito” culinary contest for past guests to submit their favorite Costa dining experience. END_OF_DOCUMENT_TOKEN_TO_BE_REPLACED