Carnival Cruise Lines took delivery of the corporation’s 100th ship, the Carnival Magic, during a ceremony at the Fincantieri shipyard in Monfalcone, Italy today, where the vessel was built.

In recognition of this achievement, on April 29 all guests sailing aboard Carnival Corporation & plc’s 100 ships will enjoy a complimentary champagne toast at dinner to commemorate this historic and unprecedented milestone. All told, more than 227,000 guests across the company’s 10 cruise brands will participate in the toast, believed to be the largest celebration of its kind at sea.

Following the traditional maritime handover ceremony in Italy, Carnival Magic will debut on May 1 with a nine-day Mediterranean cruise from Venice to Barcelona. Prior to the departure of its inaugural voyage, the 130,000-ton vessel will be named by its godmother, Lindsey Wilkerson, a former patient of St. Jude Children’s Research Hospital who now serves as an employee and ambassador of the organization. The choice of Wilkerson as godmother is a tribute to Carnival’s ongoing partnership with St. Jude, one of the world’s premier centers for the research and treatment of pediatric cancer and other catastrophic diseases.

As the line’s newest ship, Carnival Magic will introduce a host of innovations, including the RedFrog Pub, a colorful Caribbean-inspired watering hole featuring its own private label draught beer; Cucina del Capitano, a family-style Italian restaurant that brings the heritage of Carnival’s captains to the table; and SportSquare, an expansive open-air recreation complex with the first ropes course and outdoor fitness area at sea.

Other features include a WaterWorks aqua park with a 312-foot-long spiral water slide and other attractions; The Lanai, a wraparound promenade with an outdoor barbeque area and whirlpools that extend out over the ship’s sides; and Ocean Plaza, a stunning indoor/outdoor cafÃ© and live entertainment venue.

“With a combination of exciting new features such as the RedFrog Pub, SportSquare and Cucina del Capitano and other popular ‘Fun Ship’ amenities, Carnival Magic epitomizes our company’s continued commitment to providing our guests with fun, memorable vacations at an incredible value,” said Gerry Cahill, Carnival Cruise Lines’ president and CEO.

Following the May 1 inaugural voyage from Venice, Carnival Magic will sail a series of seven- to 12-day Mediterranean departures from Barcelona through Oct. 16, then reposition to Galveston, Texas, for year-round seven-day Caribbean departures beginning Nov. 14, becoming the largest ship ever based at the port year-round. 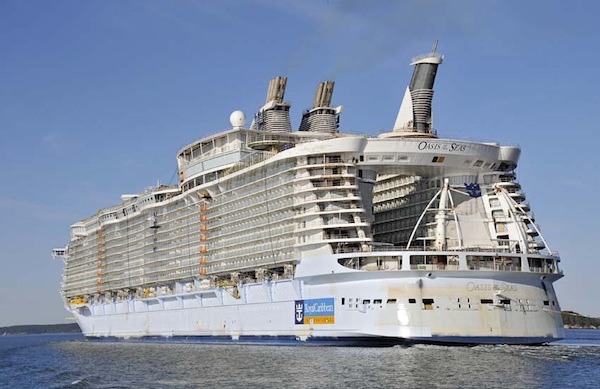 After nearly six years in the making, Royal Caribbean International took delivery today of its newest and most revolutionary cruise ship, Oasis of the Seas, from STX Europe in Turku, Finland.

Kicking off a 12-day countdown until her U.S. debut into Port Everglades in Fort Lauderdale, Fla. on Wednesday, Nov. 11, Oasis of the Seas will be departing Turku on Friday, Oct. 30 with Capt. William S. Wright at the helm. Her transatlantic crossing will be chronicled on OasisoftheSeas.com as new webisodes are posted daily and via Twitter by following @OasisandAllure. A new feature to OasisoftheSeas.com will allow visitors to view a Google Maps application and follow Oasis of the Seas journey. Richard Fain’s “Chairman’s Blog” on OasisoftheSeas.com and “Adam’s Blog” by President and CEO Adam Goldstein on NationofWhyNot.com also will provide personal updates.

Oasis of the Seas introduces unique industry “firsts” including a neighborhood concept — seven themed areas providing guests with the opportunity to seek out relevant experiences based on their personal style, preference or mood. Within these seven neighborhoods — Central Park, Boardwalk, the Royal Promenade, Pool and Sports Zone, Vitality at Sea Spa and Fitness Center, Entertainment Place and Youth Zone — are elements such as the first park at sea, a thrilling zip line that races diagonally nine-decks above an open-air atrium, an original handcrafted carousel, 28 multilevel urban-style loft suites boasting floor-to-ceiling windows, an aquatic amphitheater — called the AquaTheater that serves as a pool by day and a dazzling ocean front theater by night; and an array of epicurean innovations that allow for new culinary experiences each day of a guest’s cruise vacation.

This November, just in time for the U.S. Thanksgiving holiday, Oasis of the Seas will be unveiled on ABC’s “Good Morning America” who will be there to welcome her into her home port in Fort Lauderdale as well as give viewers an exclusive first glimpse of the ship during a special live broadcast on Friday, Nov. 20.

The official naming ceremony for Oasis of the Seas will take place on Nov. 30 during a one night inaugural celebration-fundraiser to benefit the non-profit Make-A-Wish Foundation. Tickets for the once-in-a-lifetime event begin at $750 per person and guests who wish to continue their adventure onboard will receive an exclusive discount price, beginning at $650 per person, on a four-night cruise package sailing to the cruise line’s private beach destination, Labadee, departing the morning following the event on Dec. 1. For reservations to this exclusive event combined with the four-night sailing, contact Cynthia Paez, Royal Caribbean International, at (877) 202-1520, ext. 12751, or [email protected]
Bookings are also available for Oasis of the Seas’ inaugural sailing departing on Dec. 5. The inaugural sailing will include exclusive entertainment and gifts for guests to commemorate the special occasion.

For additional information or to make reservations, call your travel agent, visit www.royalcaribbean.com or call (800) ROYAL-CARIBBEAN.