Five ships are lined up in Nassau, Bahamas today, March 12, 2010. From left are the Royal Caribbean Oasis of the Seas, Carnival Destiny, Disney Wonder, Carnival Sensation and MSC Poesia. 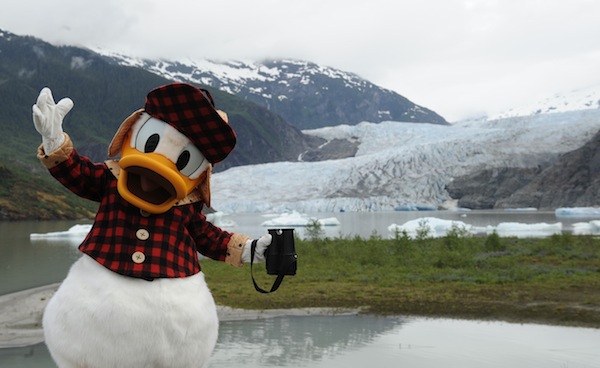 For the first time ever, Disney Cruise Line will offer Alaskan cruises during a four-month season of seven-night sailings aboard the Disney Wonder in summer 2011. The Disney Wonder will depart out of Vancouver, B.C., calling on popular ports such as Juneau, Ketchikan and Skagway.

Before and after the 2011 summer season in Alaska, the Disney Wonder will sail seven-night Mexican Riviera cruises from the Port of Los Angeles to Cabo San Lucas, MazatlÃ¡n and Puerto Vallarta. This will be the first time a Disney cruise ship will call the West Coast home for an entire year.

“We’re excited to offer this incredible choice of itineraries for 2011, with cruise vacation options for every family — whether that’s outdoor adventure in Alaska, the beauty and culture of Europe, folklore and pageantry of Mexico or tropical fun in the Caribbean,” said Disney Cruise Line President Karl Holz. “The unique advantage of Disney Cruise Line is that we offer a customized ship experience that brings families together, while still catering to the personalized vacation needs of every guest who sails with us.”

Disney Cruise Line also will offer a number of repositioning cruises and special sailings in 2011, including a 15-night Panama Canal crossing, two 14-night transatlantic voyages, a five- and six-night cruise from Los Angeles to Vancouver, and Vancouver to Los Angeles, with first-ever stops in San Francisco and Victoria, B.C., and 10- and 11-night holiday sailings to the Mexican Riviera and the eastern Caribbean.

Guests can now book Disney Wonder and Disney Magic itineraries for the 2011 season.

Here’s a video of Donald Duck on an Alaskan adventure.

We’re aboard the Disney Wonder through Thursday as part of the Disney Channel Summer at Sea. Follow along with us on Twitter. We’ll be posting live photos and videos as we sail to Disney’s Castaway Cay and Nassau, Bahamas.

We’ll also be taking part in a Q&A session with the stars. Let us know if you have any questions you’d like us to ask, or if there’s anything you’d like to know or see on the ship.
If you’re on Twitter, you can contact us @cruiseguide or send an e-mail to [email protected]