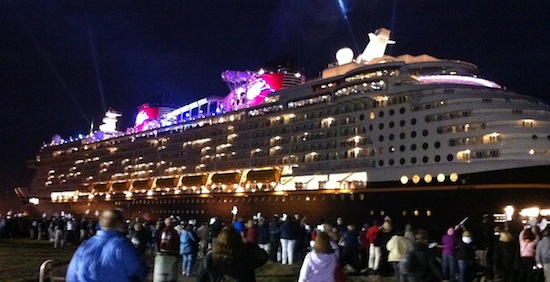 Photos and video by Joe Moschinger

The newest Disney Cruise Line ship, the Disney Dream, sailed into her homeport of Port Canaveral this morning after a 16-night trans-Atlantic voyage from Germany, where it has been under construction for nearly two years. Beginning with a maiden voyage on Jan. 26, the Disney Dream will sail three-, four- and five-night cruises to the Bahamas, calling Port Canaveral home.

Here’s a video of her arrival with fireworks and cast members cheering her on:

“We are delighted to welcome the Disney Dream to its new homeport,” said Karl Holz, president of Disney Cruise Line. “As we grow the Disney Cruise Line business, not only does this mean a positive economic impact for the region, but this allows us the flexibility to provide even more options to our guests. With new innovations onboard and new destinations to explore, ultimately we’re providing even more ways for guests to enjoy a family cruise vacation.”

The recent construction project for Disney’s cruise terminal and dock area in Port Canaveral has also delivered economic benefits. Enhancements include an expanded dock area and terminal facility, along with the construction of a new parking garage connected to the terminal by a sky-bridge walkway.

“This is a special time for us,” says Port Canaveral Chief Executive Officer J. Stanley ‘Stan’ Payne. “We’re thrilled to welcome the Disney Dream home to her expanded terminal facility. We continue to have a great relationship with Disney Cruise Line and we look forward to continuing that for many years to come.”

In addition to the expansion at Port Canaveral, Disney has also made enhancements to its private island in the Bahamas, to further accommodate the new ship and more guests. From extended beaches and more dining locations, to the addition of private beach cabanas and Pelican Plunge, a new floating water play structure with water slides, Castaway Cay boasts even more offerings and activities for families to enjoy.

With the arrival of the Disney Dream to its homeport in Florida, preparations are underway for its inaugural cruises and events, including the traditional christening of the vessel. Other Disney Dream inaugural events include a Benefit Preview Cruise in support of Boys & Girls Clubs of Central Florida, sailing Jan. 21-23.

Accommodating up to 4,000 guests, the 130,000-ton Dream has many industry firsts such as the AquaDuck water coaster and Magical Portholes that transform inside staterooms into rooms with magnificent views. A sister ship, the Disney Fantasy, is under construction at the Meyer Werft shipyard in Papenburg, Germany, and will arrive in early 2012. It will sail seven-night eastern and western Caribbean itineraries, also from Port Canaveral.