Carnival Cruise Lines is inviting their Facebook fans to experience the excitement of Carnival Magic’s May 1 launch from Venice, Italy, with a series of videos that showcase the ship’s inaugural activities along with its many unique features. Then fans can participate in a Facebook quiz based on the videos for a chance to win a seven-day Carnival Magic cruise for four to the Caribbean.

A series of 11 videos will be posted every half hour between 9 a.m. and 2 p.m. (U.S. Eastern time) on Sunday, May 1. The videos take viewers on a journey as they enjoy a front-row seat at the Carnival Magic’s naming ceremony, tour the ship’s bridge, and learn more about the Caribbean-inspired RedFrog Pub, WaterWorks aqua park, and Cucina del Capitano Italian restaurant, with insight from company executives who helped create these exciting new spaces.

The videos also offer an in-depth look at the ship’s European ports of call and a recap of the day’s events, including a chat with the ship’s godmother, Lindsey Wilkerson, a former patient of St. Jude Children’s Research Hospital who now serves as an employee and an ambassador of the organization. Carnival Magic’s Senior Cruise Director John Heald will also answer questions submitted by Facebook fans as part of an informative “Ask John” segment.

“Only a handful of people get to witness a ship launch in person so by using Facebook we’re enabling fans from all over the world to be right there with us as we welcome Carnival Magic into the fleet,” said Jim Berra, Carnival’s chief marketing officer. “Those who are not already among our 725,000 and growing Facebook fans can visit us at facebook.com/carnival and simply hit the “like” button.”

The 3,690-passenger Carnival Magic will spend its inaugural season in Europe with a series of seven- to 12-day Mediterranean cruises operating May 1 through October 16, 2011. Following a 16-day trans-Atlantic crossing, Carnival Magic will begin seven-day Caribbean cruises out of Galveston, Texas, on November 14, 2011, becoming the port’s largest year-round ship. 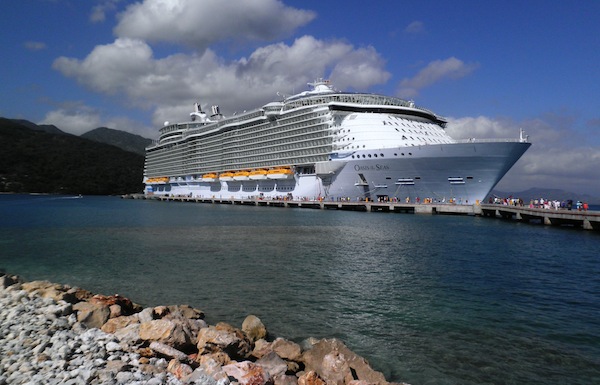 The Florida Lottery today announced a new Royal Caribbean themed Scratch-Off game: Cruise for Cash. With ticket sales beginning today, the $5 game offers Lottery players the chance to win up to $200,000 instantly. And, a second chance promotion on the Lottery’s website offers players the chance to win a seven-night Caribbean cruise vacation for two aboard one of Royal Caribbean’s Oasis of the Seas or Allure of the Seas. The new game is available at Florida Lottery retailers statewide.

“Tourism is a vital part of Florida’s economy, and this partnership between the Florida Lottery and Royal Caribbean International is a unique opportunity to bring together Florida’s public and private sectors to promote one of the state’s greatest tourist industries – cruising,” said Florida Lottery Secretary Leo DiBenigno.

Florida is home to the top three cruise ports in the country: Port of Miami, Port Canaveral and Port Everglades. According to the Cruise Lines International Association, the North American cruise industry generated $35.1 billion in 2009, with Florida port embarkations growing by nearly three percent – making up 59 percent of the U.S. total.

“We are pleased to be working with the Florida Lottery on the Cruise for Cash game, which helps raise additional funds for education,” said Vicki Freed, Senior Vice President Sales and Trade Support & Services, Royal Caribbean International.

“We expect Cruise for Cash to have a wide appeal among Floridians and visitors to our great state, helping us maximize sales for the enhancement of public education,” added Secretary DiBenigno.

In addition to four $200,000 top prizes, Cruise for Cash also features more than 1.6 million cash prizes ranging from $5 to $2,500. The game’s overall odds of winning are one in 3.87. The game is the latest themed Scratch-Off in the Lottery’s game portfolio, offering players instant cash prizes and additional chances to win via a second chance promotion on the Lottery’s Web site.

Beginning today, players may enter their non-winning Cruise for Cash tickets in five Royal Caribbean International Cruise Package Second Chance drawings to be held from Oct. 6 to Dec. 15, 2010. Each cruise packages include seven nights aboard the Oasis of the Seas, Allure of the Seas or another Royal Caribbean cruise ship sailing select itineraries. Winners of the second chance drawings will tour their respective Caribbean destinations in a balcony stateroom, with an ocean view for two. Cruise winners also will receive $1,000 in ship credit and premium accommodations for two at a deluxe hotel prior to departure. There will be a total of 112 cruise packages awarded with this game.

The Florida Lottery offers more than 50 Scratch-Off games at any given time through instant ticket vending machines (ITVMs) or on-counter displays at more than 13,000 retailers statewide. Scratch-Off games are an important part of the Lottery’s portfolio of games, making up approximately 53 percent of ticket sales and generating more than $396 million for the Educational Enhancement Trust Fund (EETF) in fiscal year 2009-10.