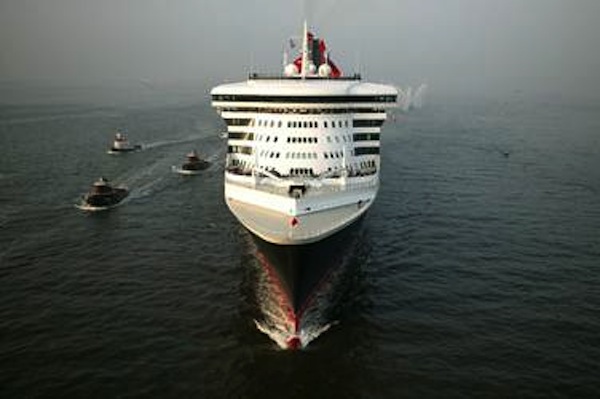 When Cunard Line’s flagship Queen Mary 2 sails into New York harbour on Saturday 1 June, at the conclusion of her current Transatlantic Crossing from Southampton, she will arrive on the 77th anniversary of the maiden call of the original Queen Mary in New York in 1936.

Queen Mary’s Maiden Voyage began in Southampton on 27 May 1936 when she departed to the sounds of gleeful bands and ecstatic crowds. On board were the famous bandleader, Henry Hall, scheduled to give a series of live radio broadcasts during the Crossing; the virtuoso harmonica player, Larry Adler; and well-known singer, Frances Day, who performed a song written especially for Queen Mary by Henry Hall. Interestingly, Miss Day was doubtful of the ship’s ability to provide fresh eggs throughout the voyage, and so brought along her own chickens.

Seventy-seven years later, flagship Queen Mary 2 left Southampton last Saturday, 25 May, for New York. On board to speak is Jeffrey Weinberg, adviser to seven U.S. Presidents; and passengers still enjoy Cunard’s renowned on board entertainment, including presentations from the Royal Academy of Dramatic Art (RADA). Today, the eggs – all 45,000 of them – are fresh and plentiful, and the Line’s legendary Transatlantic Crossings live on.

“During her nearly 10 years in service, Queen Mary 2 has proudly continued the Transatlantic legacy of elegance and glamour that Queen Mary so beautifully exemplified during her long reign of service,” said Peter Shanks, president of Cunard Line.

“On this special anniversary, we are also pleased to continue to call New York our U.S. homeport, a city which has embraced our ships throughout the decades and played a prominent role in many Cunard milestones,” Shanks added.

Queen Mary would cross the Atlantic another 1,000 times during her 31-year career before being retired in 1967. Queen Mary 2 will sail her 200th Crossing on 6 July – from New York – during this, her ninth year on the Atlantic.

For more information about Cunard, and to book a voyage aboard Queen Mary 2, contact your Travel Agent, call Cunard toll-free at 1-800-728-6273, or go to www.cunard.com.