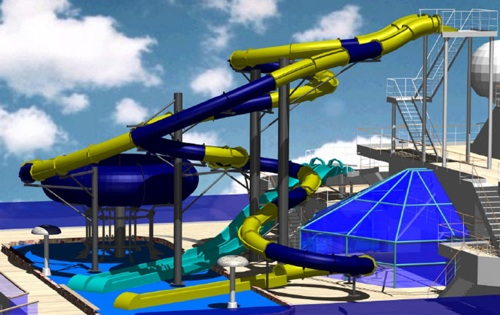 Carnival has released a new artist’s rendering and a test video of The DrainPipe, a unique water slide that will be on the new Carnival Dream when it launches Sept. 21.

The 104-foot-long slide — comprised of a giant funnel attached to an enclosed spiral water slide to providing riders with a thrilling conclusion to their journey — will be a central component to the ship’s sprawling WaterWorks aqua park.

WaterWorks is just one of the many innovations featured on the 3,646-passenger vessel, which will also include a new concept in entertainment called Ocean Plaza, cantilevered whirlpools that extend out over the ship’s beam, and a 23,750-square-foot Cloud 9 Spa — the largest in the “Fun Ship” fleet. A wide range of accommodation categories, including new “cove balcony” staterooms located closer to the water line and deluxe ocean view staterooms with five berths and two bathrooms, will also be featured.

Below is video footage of Carnival employees testing the new DrainPipe attraction.