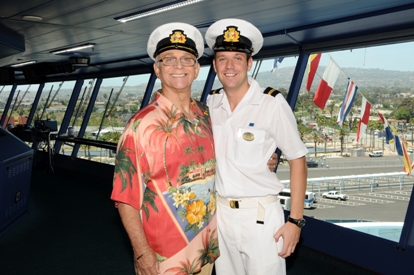 What’s in a name? Well, at Princess Cruises the name Gavin MacLeod naturally is associated with the famous TV captain of The Love Boat. But it turns out that the line coincidentally also has a real-life bridge officer with the same name. And the long-time Princess ambassador couldn’t wait to meet him.

When Island Princess Third Officer Gavin MacLeod, who hails from Inverness, Scotland, joined Princess in 2010, he never gave much thought to the fact that he shared a name with the actor who made the role of “Captain Stubing” an iconic part of television history.

But last week when Island Princess called at the port of Los Angeles, the two men met on the ship’s bridge and enjoyed lunch together at Sabatini’s restaurant. The pair also signed several navigational charts to be auctioned for charity.

Frequently filmed aboard Princess ships throughout its 1977-86 run, The Love Boat created a lasting legacy in the cruise industry. Actor Gavin MacLeod has continued his association with the cruise line ever since, serving as an ambassador who travels regularly aboard Princess ships and represents the company at a variety of events throughout the year.

Additional information about Princess Cruises is available through a travel agent, by calling 1-800-PRINCESS (1-800-774-6237), or by visiting princess.com.